Chef Rusty Hamlin agreed to meet me for an interview at his popular, down-home restaurant, The Tavern, in Smyrna, Ga. It only took a second to realize how fun-loving he is, yet this is one passionate man when it comes to cooking and music. He takes all of it seriously – and to heart. But it’s impossible not to feel right at home with his warmth and infectious laughter. 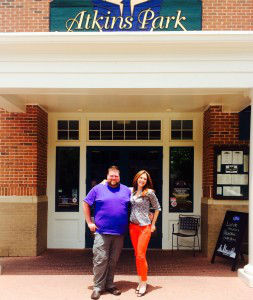 With Chef Rusty outside his restaurant!

Approximately 15 years ago, Chef Rusty was visiting a local Georgia bar, where he heard up-and-comer Zac Brown for the first time. Rusty realized he was in the presence of a special, dynamic musician. He loved the sound, loved the music.

“Zac and I met and had a cool connection. The next thing I had to do was get him to the restaurant and come try our food. He came up, and thankfully he fell in love with it!”

“Over the past 14 years, I’ve found that more and more that musicians and chefs get along really well. They have similar attributes when it comes to their creative arts. So many musicians I’ve met truly love to cook, too. Lots of them cook for their bands and really enjoy the sense of community it creates.”

“Over the past 14 years, I’ve found that more and more that musicians and chefs get along really well. They have similar attributes when it comes to their creative arts. So many musicians I’ve met truly love to cook, too. Lots of them cook for their bands and really enjoy the sense of community it creates.”

Over hummus, a fully-dressed Shrimp po-boy, sweet potato fries, muffaletta, and a side salad, I enjoyed an awesome lunch prepared by The Tavern, while Chef Rusty Hamlin filled me in me about the genesis of the Eat ‘n Greets. Amid laughs, oohs ‘n ahhs from the incredible Southern-style food before me, I listened in awe – and admiration. What Rusty has accomplished – and has been doing for Zac Brown Band with the Eat ‘n Greets - has never been done before. It’s no slight undertaking. 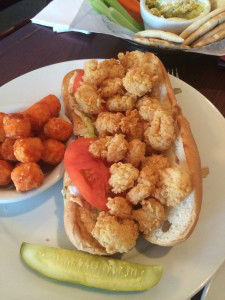 HUGE Po-Boy that was outta the world! 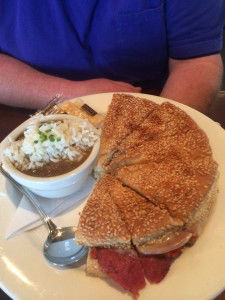 “In 2002, I was out at Zac’s house in Lake Lake Oconee, and over moonshine and guitars, we discussed concerts — what’s good about them, what isn’t great, what could be improved, and how Zac could get closer to his fans.”

“In 2002, I was out at Zac’s house in Lake Ocanee, and over moonshine and guitars, we discussed concerts — what’s good about them, what isn’t great, what could be improved, and how Zac could get closer to his fans.”

Making great food for the fans quickly became a topic these two bonded over, the way a shared meal could be a more meaningful experience to offer between the bands and the guests than, say, a simple photo op. 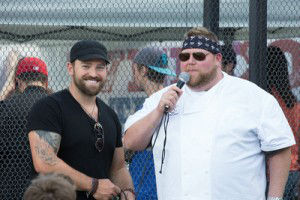 Chef Rusty and Zac Brown talking to fans before they eat!

Thus the Eat ‘n Greets were born. Chef Rusty took on the task of creating an incredible gourmet meal on the road — daily — prepared with great local food and served to 200 people by Zac and his band.

“Now I realize that putting a plate of amazing food in front of someone can make them a fan for life! They really really appreciate it and it’s really cool.”

“Now I realize that putting a plate of amazing food in front of someone can make them a fan for life! They really really appreciate it and it’s really cool.”

Guests come in before the concert, the band introduces themselves, talks to them, and everyone sits down to eat.

“We always first serve some table food, like boiled peanuts, popcorn, something to fiddle with – anxious food, (LOL), and the band comes in and Zac and I talk about the dishes, what farms I went to earlier that day. And I love love love going to the farmers and saying ,’Hey what are you doing tonight? Come be my guests at the show!’”

I love love love going to the farmers and saying ,’Hey what are you doing tonight? Come be my guests at the show!’”

Chef Rusty introduces the farmers to the fans so everybody will know where their food came from – and that there’s a farm available in the area. He explains that he was with the farmers earlier that day as they were planning and providing the food for the event. “And then I’m able to feed the fans real food, straight from the farm!” 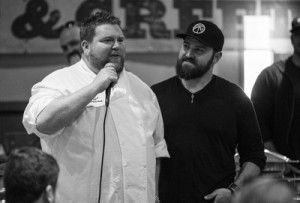 Chef Rusty introducing and giving some love to the farmers!

Cooking for 200 people can’t be easy, but somehow he does it – and all the while living out of a suitcase underneath the bus.

“We’ve got it down pretty smooth now, and my forte is to make a full menu off the cuff .”

“We’ve got it down pretty smooth now, and my forte is to make a full menu off the cuff .”

Now Chef Rusty has someone that “advances” for him, helping to scope out where he can go to shop for goods. Almost without fail, he buys from farms and farmer markets because he wants to support local farmers wherever he can.

“But sometimes when we’re touring, it certain areas it can be rough ‘cuz there’s not a vegetable in sight.”

That’s when he says you have to hit a Piggly Wiggly, because, well, you have to make it happen. “But as a chef you want to make succotash out of local, fresh vegetables.” And that’s typically his rule — not the exception.

“When I grew up in Louisiana, there were certain types of farmers we just always took care of ¬– sugarcane, strawberries, creole tomatoes, and the okra - Southern stuff that came out of the wetlands. I also had a camp in Leeville, with a camp that was twenty feet from the oyster, shrimp, and crab boats. We could support the guys right there. My passion started from this and grew when I went to culinary school. When I came to Georgia in ’96, I worked with chefs here that used local, and I got hooked on it. There’s an amazing difference.”

He feels like he’s part of a movement, too.

“I’m not a stuck-up kind of chef, where you have to buy organic, you have to buy local, but if I could just get one family to go to a local farm twice a month, on a Saturday, then things will just start coming together, they’ll start running out, they’ll need to buy more land, and we can slowly get away from using pumped up, injected vegetables from across the border. It literally makes me sick when I think about some of the things that they’re doing with these products.”

In his semi-truck with a hot pin-up babe painted on the side, Chef Rusty jokes that they are like a circus coming to town. With fourteen 18-wheelers and nine tour buses, a town can’t miss it when the band is rolling in. Every three or four shows will be in a new place, he says, but 75% of the time it’s a repeat city so he can go back to the farmers that he’s gotten to know. But anything can happen when he’s on the road and fighting the clock to create, shop for – and prepare – a meal for 200 people that night. Yes, that night! 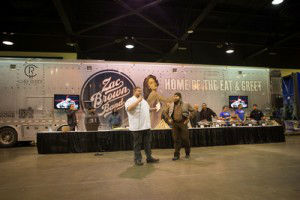 Chef Rusty and Zac Brown in front of the huge Eat and Greet trailer!

Time can feel like the enemy in these cases, as Rusty has to figure out what the meal will be as he’s actually walking through the farmer markets – or visiting the farms. 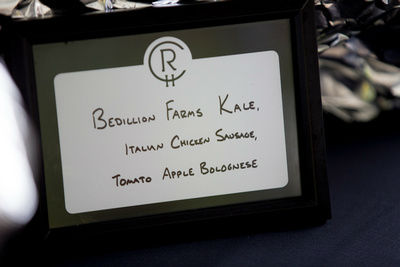 Every day he jumps up with a runner to hit the local area and see what’s available. He welcomes the challenge: thinking of flavors, considering what’s in season right now, coming up with the dish itself , finding all his ingredients from the market as he walks around concocting a recipe. It can take hours, working his way through a market while creating a menu in his head that will wow all of tonight’s guests. He even dreams recipes, waking up with visions of ginger ale vinaigrette, or orange cream soda reduced glaze for carrots.

“I wake up from a dream with a new recipe…I dream about dishes all the time.”

“I wake up from a dream with a new recipe…I dream about dishes all the time.” 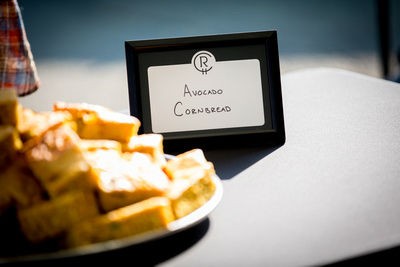 No words, except YUM!

He bakes fresh bread every day, making something different throughout the week - from challah to French loaves to sourdoughs to sweet breads and biscuits. Zac has three recipes that he always wants, so they are made daily: pocket knife cold slaw, beef tenderloin with Georgia clay rub, and the pork tenderloin with a brown sauce. Those three stay the same all the time – daily for the last five years. On top of that, Rusty adds a fresh salad each day, plus two vegetables, one starch, and a dessert.

I really don’t know how he does it – starting from scratch every 24 hours, and doing it all on the road.

If it’s a ‘perfect’ day, Chef Rusty will have five hours after shopping to create, prep and cook – and then serve at 5:15pm. If it’s a perfect day.

“And it’s never a perfect day! So sometimes I’ll get back around 1 or 2. And sometimes – like what just happened at Fenway Park, they move the time to serve up to 4:30. Thanks, perfect!” He grits and grins.

Of course, the Eat ‘n Greet at Fenway Park somehow all went smoothly, because Rusty’s a pro who takes pride in his cooking and in his art. And despite his easy-going personality, there’s nothing ever taken for granted when Rusty is cooking for the Eat ‘n Greets. His menus are somehow always creative, inspiring, and delicious.

And I haven’t mentioned Rusty’s desserts, which will make your mouth water like mine did when his signature chocolate homemade peanut butter biscuit pudding with homemade caramel sauce and homemade rum sauce was put in front of me. Fugheddaboutit. I dug right in and didn’t even take a picture first! 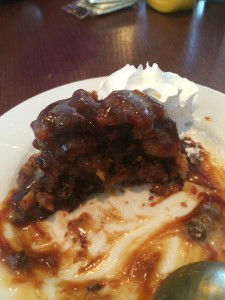 At least I slowed down enough to take a pic of half my dessert!

This was one of his desserts served for the Eat ‘n Greets, but his other desserts sounded equally incredible. He’d been soaking cherries in sangria for four days and had just made a sangria cherry cobbler with them. Then he created a strawberry white chocolate shortcake cobbler. For the cobbler, he reduced strawberries with a bit of cane sugar, swirled white chocolate throughout, and served with a spicy pound cake. Need I say more?

Remember, all of this is made up on the fly … and shopped for that morning!

Chef Rusty has blown me away with what he does on a daily basis, creating so much joy for fans of the ZBB with his magical, on-the-fly, on-the-road gourmet meals. I’m in awe — stuffed, and happy. Like all those lucky Zac Brown Band followers!